A decade ago, you probably wouldn’t have wanted to hang around in this part of town.”

Our tour guide gestures all around him. It’s fairly hard to parse this part of Amsterdam with the neighbourhood that he’s describing, one that is downtrodden and dilapidated, plagued by crime, drugs and a multitude of social issues. I watch as scores of cheerful tourists hop off the ferry at Buiksloterveer and make their way over the IJpromenade to the artfully modern Amsterdam EYE museum or pose for joyous, cheesy photographs beside the Iamsterdam sign. Nearby, people sit for their morning coffee and brunch on the balcony of Tolhuistuin, overlooking the IJ towards Amsterdam central on the opposite bank. Amsterdam Noord has certainly changed in the last decade.

We’re stood outside ClinkNOORD, where I am spending the next few days, on one of the regular walking tours of the Amsterdam Noord neighbourhood that is organised by the hostel. Opening in 2015, our guide gives Clink some of the credit for Noord’s regeneration. “Obviously, with tourists comes money, which means new bars, restaurants and tourist attractions, a lot of them catering to the youthful customers that a hostel brings.”

Clink occupies the imposing 1920’s brick structure that was once the laboratory of the Shell corporation. It has been stylishly refurbished to create space for hundreds of guests, incorporating many of the buildings original design features to create bustling common areas, a relaxing atrium, and the vibrant, lively ZincBAR where the hostel puts on regular live music, DJs, performances and social events. 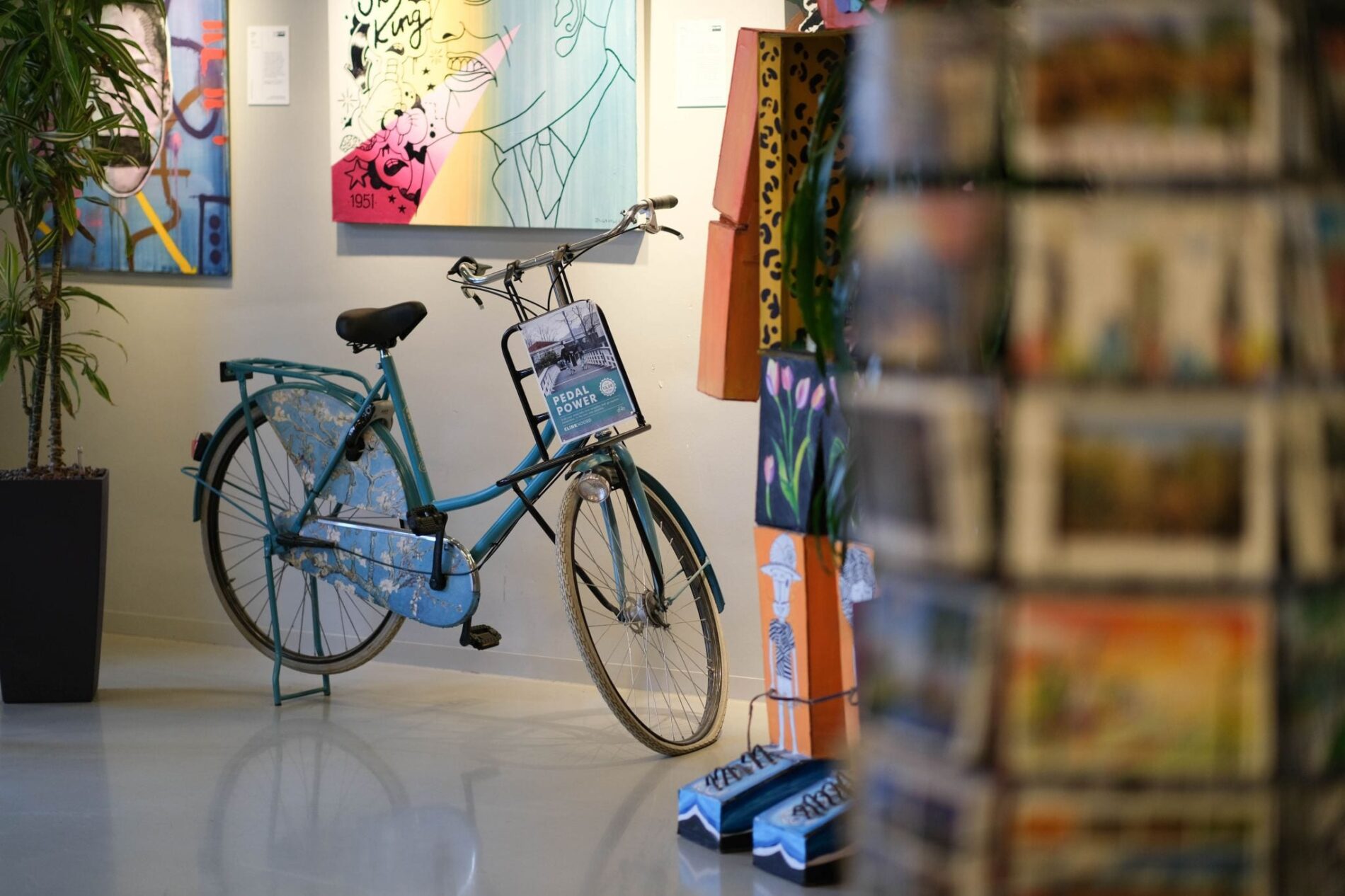 Shell’s laboratory isn’t the only building that used to belong to the corporation to have been given a new lease of life in Noord’s regeneration. Just across a footbridge, over the canal from the hostel’s entrance, is Tolhuistuin, the former Shell employee canteen that has been transformed into a cafe, restaurant, event space, and cultural centre, hosting frequent art shows and gigs. Behind the venue, the empty land has been converted into a community park and garden, while at the front, dozens of people sit on the canteen’s upstairs balcony, sipping beers and cocktails with a view of Amsterdam’s Central Station on the other side of the IJ.

Next door to Clink, the 22-storey A’DAM Toren, opened in 1971 as home to Royal Dutch Shell, has had a multi-million euro refit and now boasts a rooftop observation deck, a swish boutique hotel, a nightclub and a selection of top-notch bars and eateries.

Separated from the rest of the city by the IJ river, Noord can feel a world away from the crooked, gabled buildings and ring of beautiful canals that define Amsterdam’s city centre. It’s an area filled industrial warehouses and residential buildings owing to its maritime heritage that dates back to the 1600s. However, when shipbuilding and industry declined in the late part of the 20th century and much of Noord was left in a state of disrepair. Abandoned and tumbledown, Noord began to attract squatters and artists in the 1990s with the hipsters and creative industry soon following. 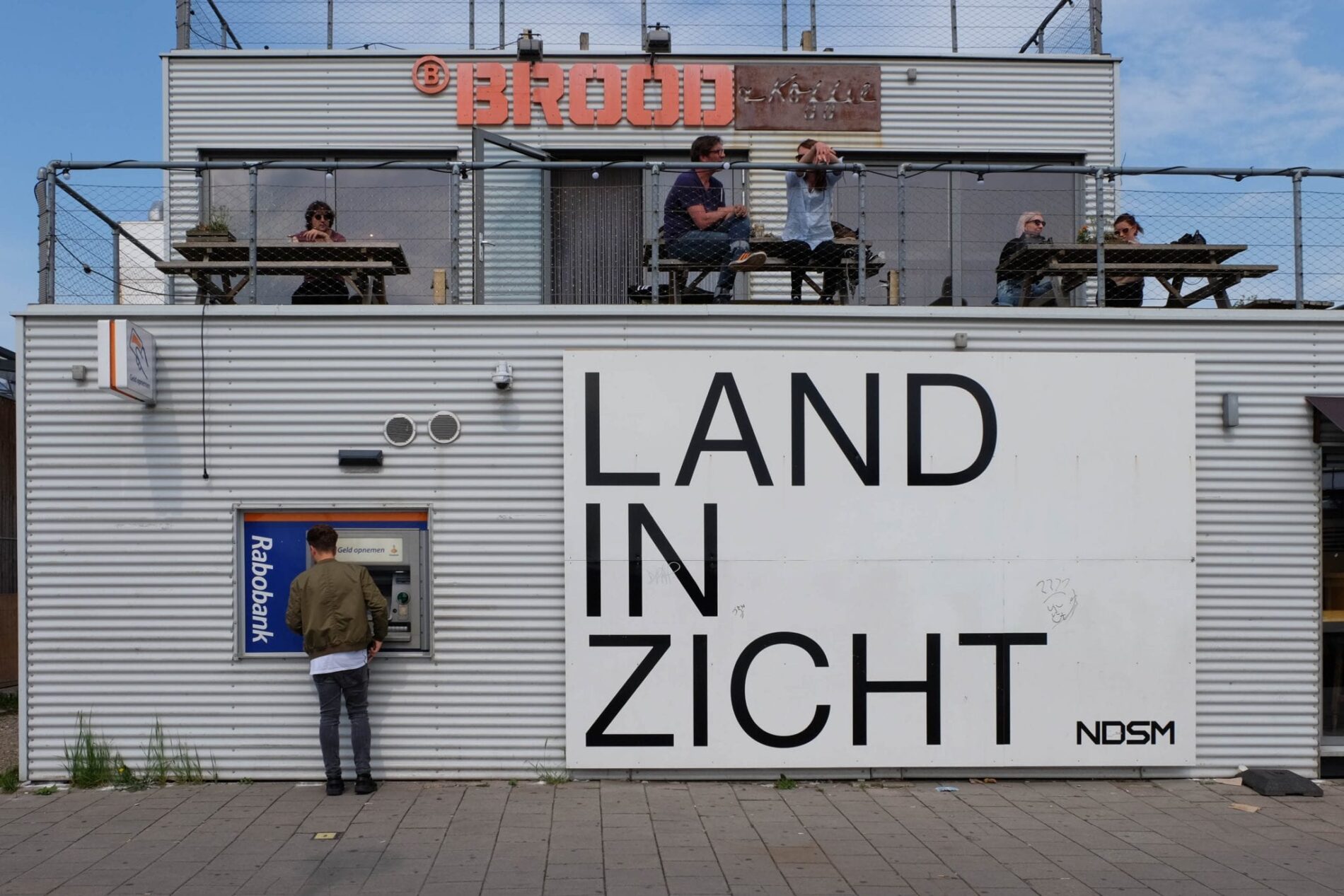 Now, decades later, Noord has been transformed into Amsterdam’s edgiest and coolest neighbourhood. It’s a place that is constantly evolving and where there’s always a new hotspot drawing in crowds from all over the city. No place epitomises this as much as NDSM, a former wharf and hub of the shipbuilding hub that has undergone a rapid transformation. We take the five-minute ferry back to Amsterdam Centraal Station and then hop another one over to NDSM. As soon as we hit land, it’s visible just how rapid the pace of change is here. Construction is going on all around us. 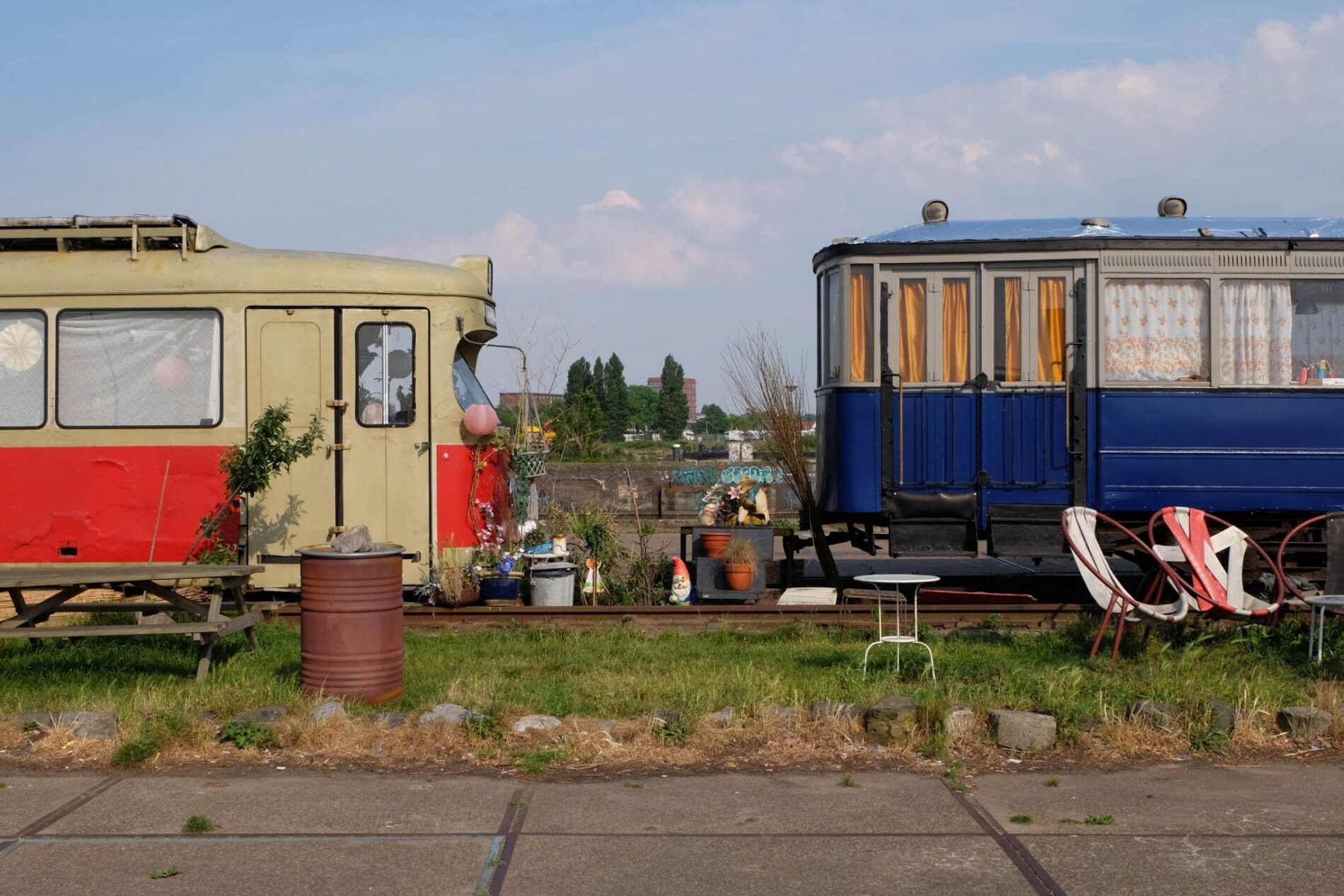 Originally settled by squatters, some of whom still reside here in an ‘artists village’ that is in the process of being moved to the far end of the wharf to make space for new buildings, although the artists that live here will be given land and a market in which to sell their art, it wasn’t long before hipsters and creatives moved in to utilise the cheap, abandoned buildings. Inside one NDSM hangar, you’ll find Kunststad (Art City), with studios for 200 artists and designers. Elsewhere, old office buildings have been converted into cafes and restaurants while even abandoned trams and old shipping containers have been modified to create venues – like Pllek, a restaurant with its own man-made beach that regularly hosts events on its outdoor terrace such as gigs, DJs and film nights – and in one case, a huge stack of them has been made into low-cost housing. 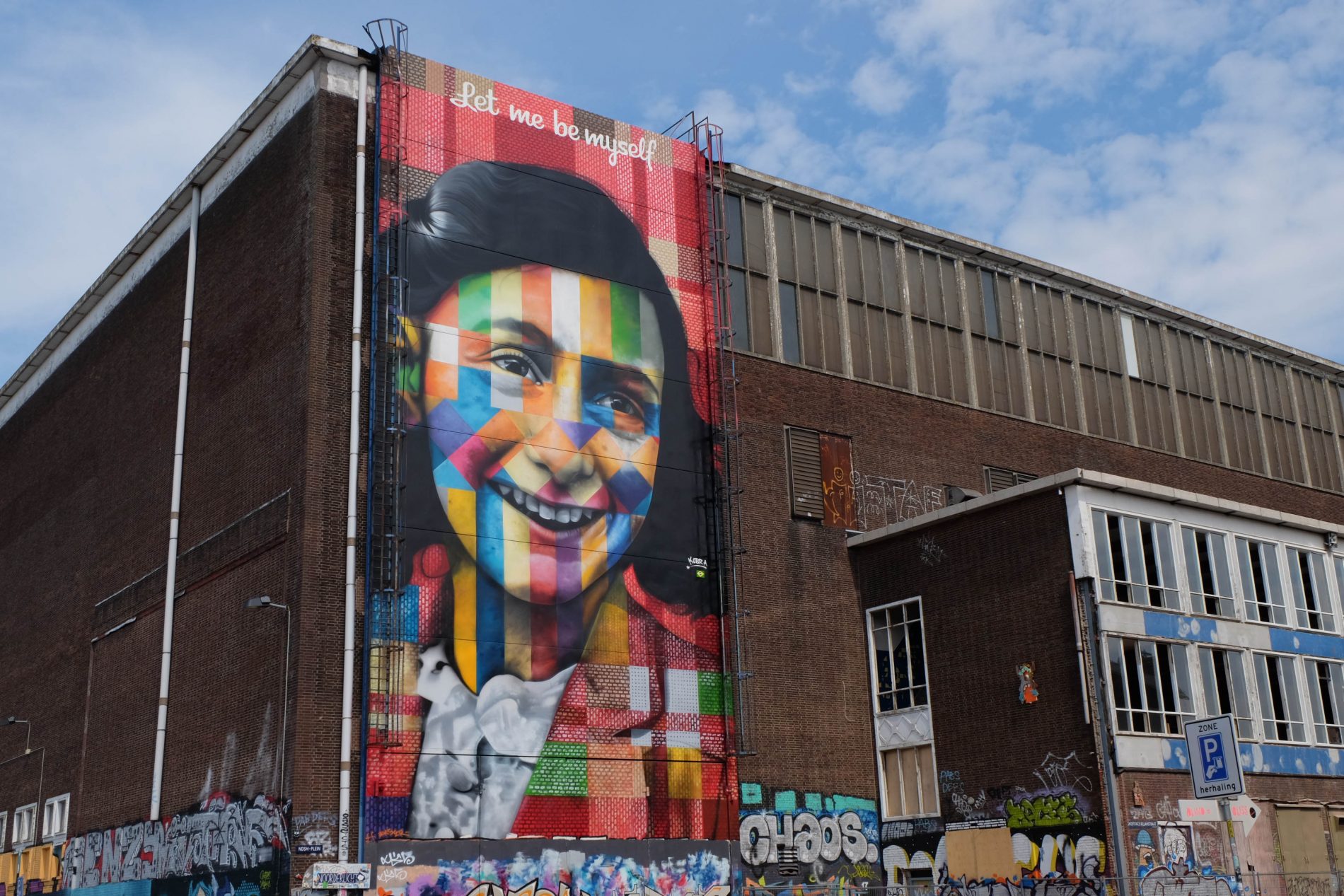 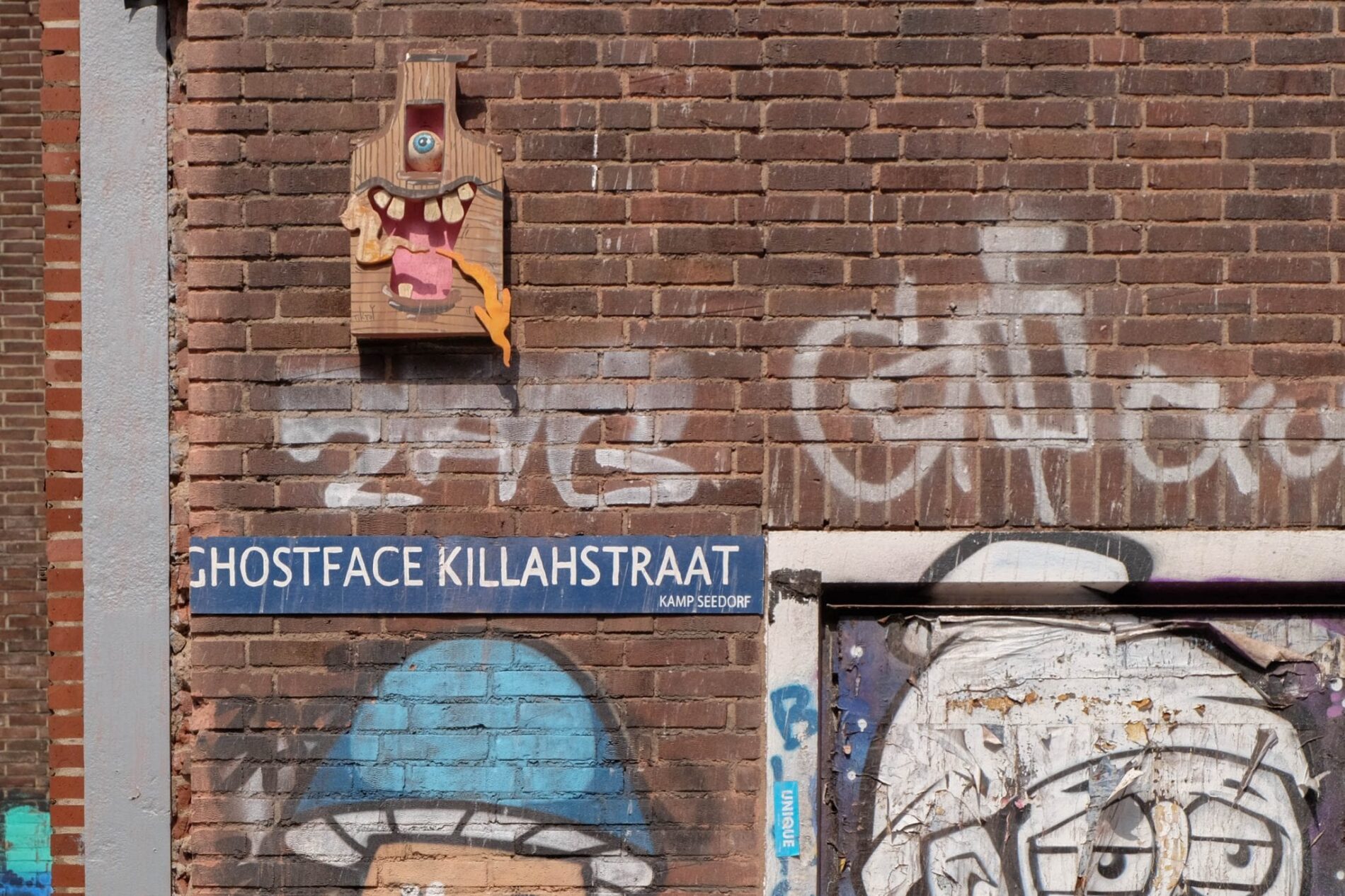 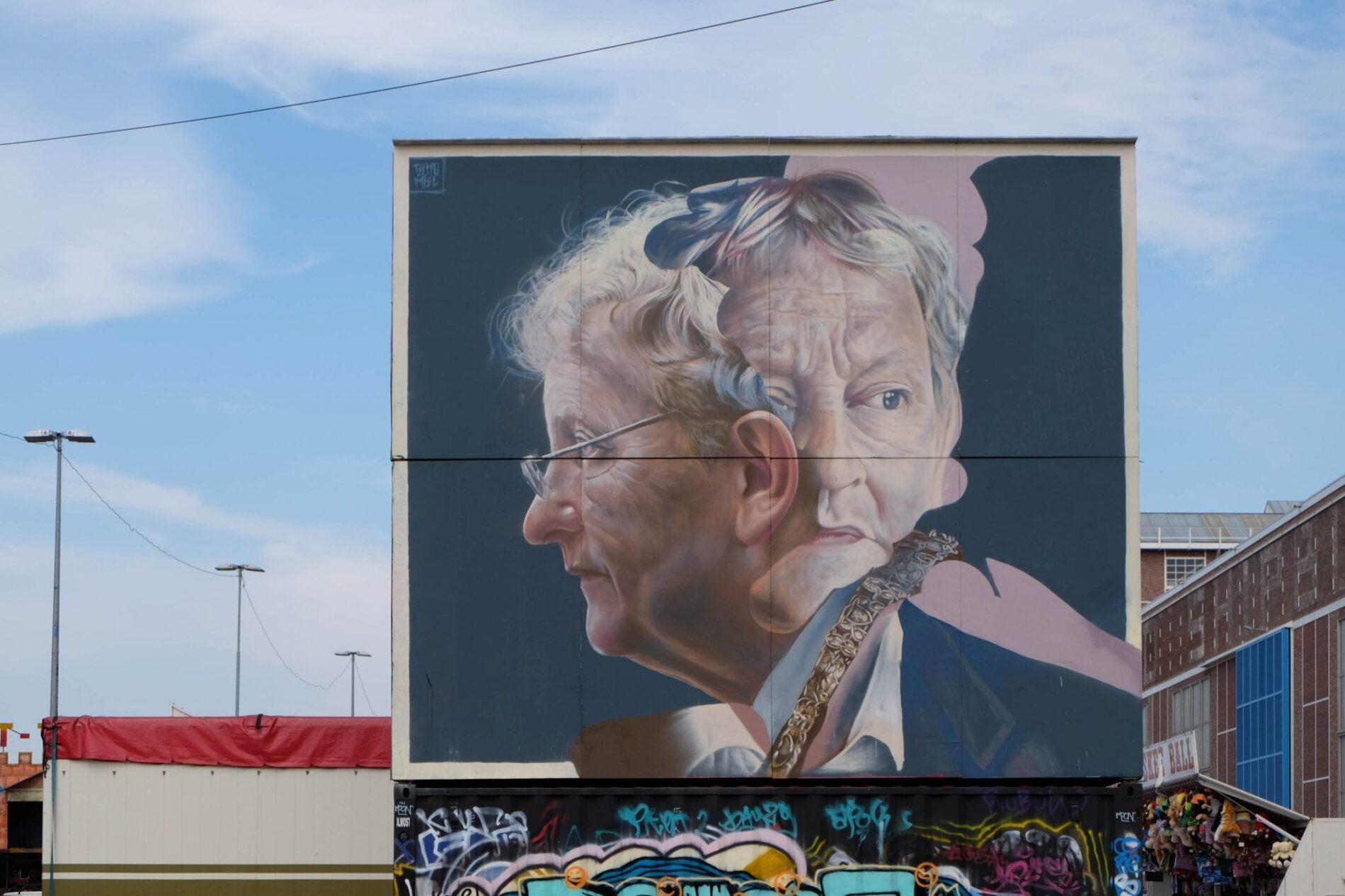 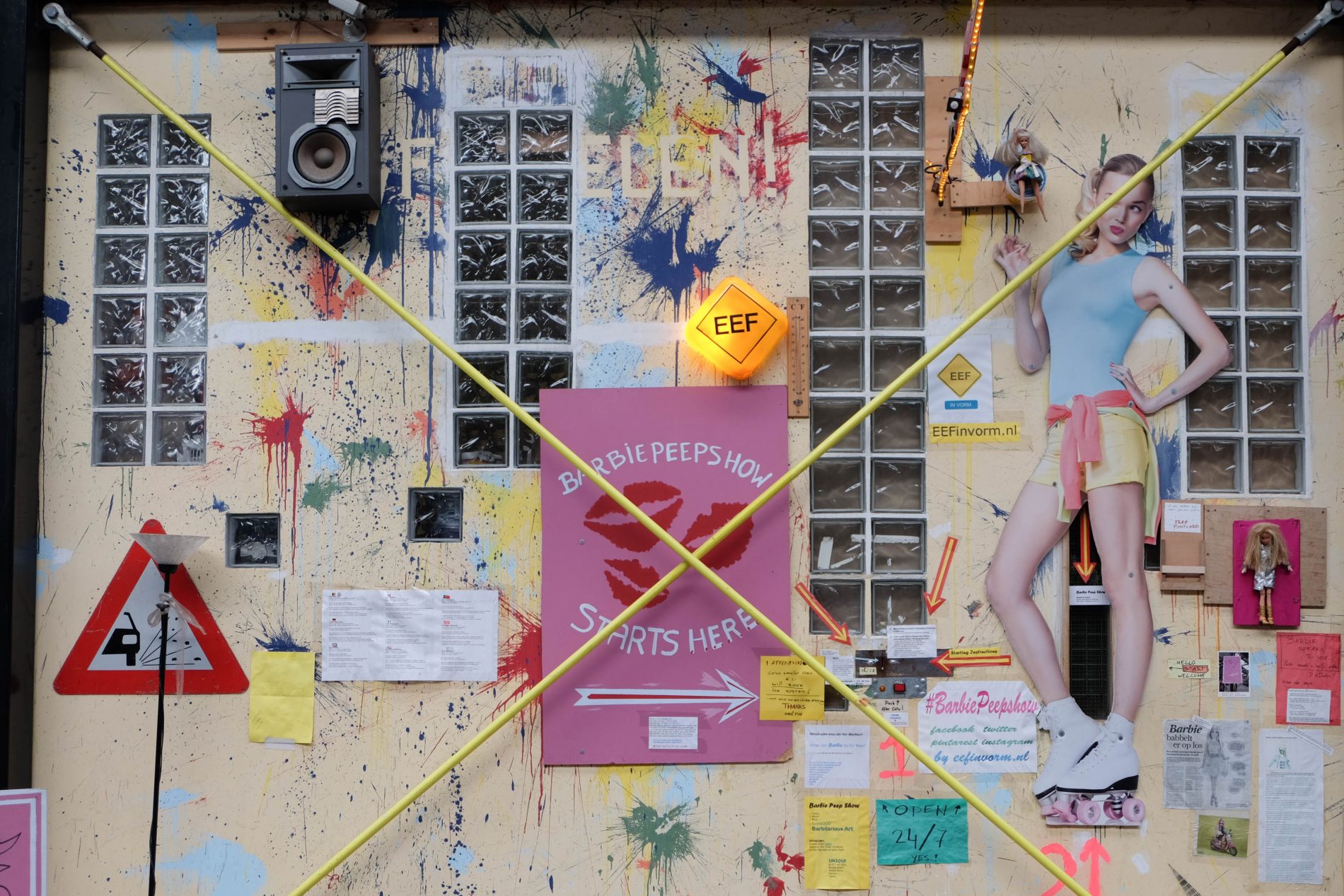 Throughout all the change and construction, the area’s artistic past remains. There is no better place in Amsterdam to see street art (the huge Anne Frank mural by Brazilian artist Eduardo Kobra being the most notable) and while the small one-story building in the middle of NDSM with a large, illuminated ‘SEXYLAND’ sign perched on its roof may seem like it is more at home in the city’s Red Light District, it is actually a community-owned art and event space. Sexyland is a members’ club that has 365 co-owners, each of whom puts on an annual event, a different one on every day of the year. This can range from art shows to ping-pong, swing dancing to club nights at a weekend. The public can attend any of the activities by buying a month-long membership. 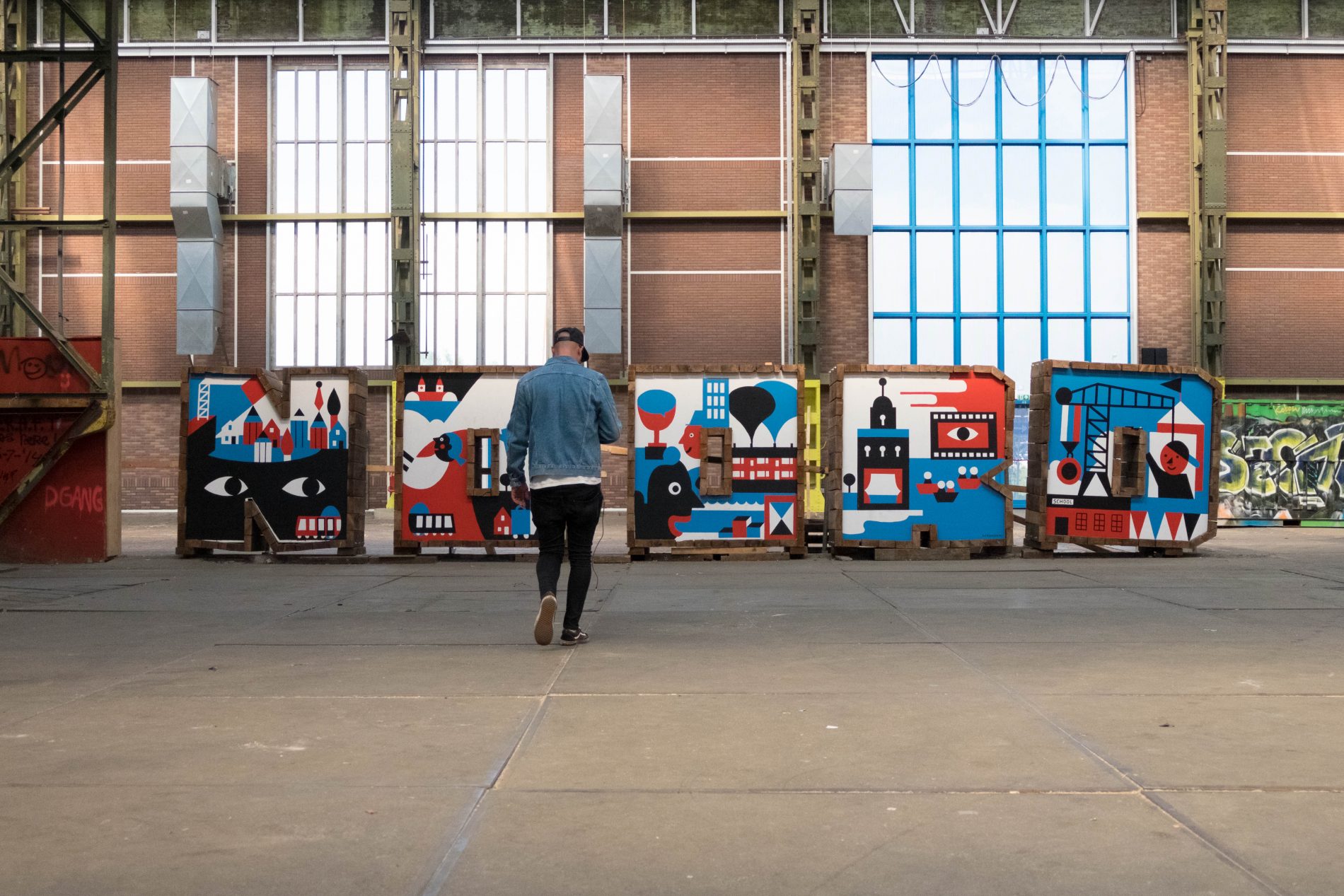 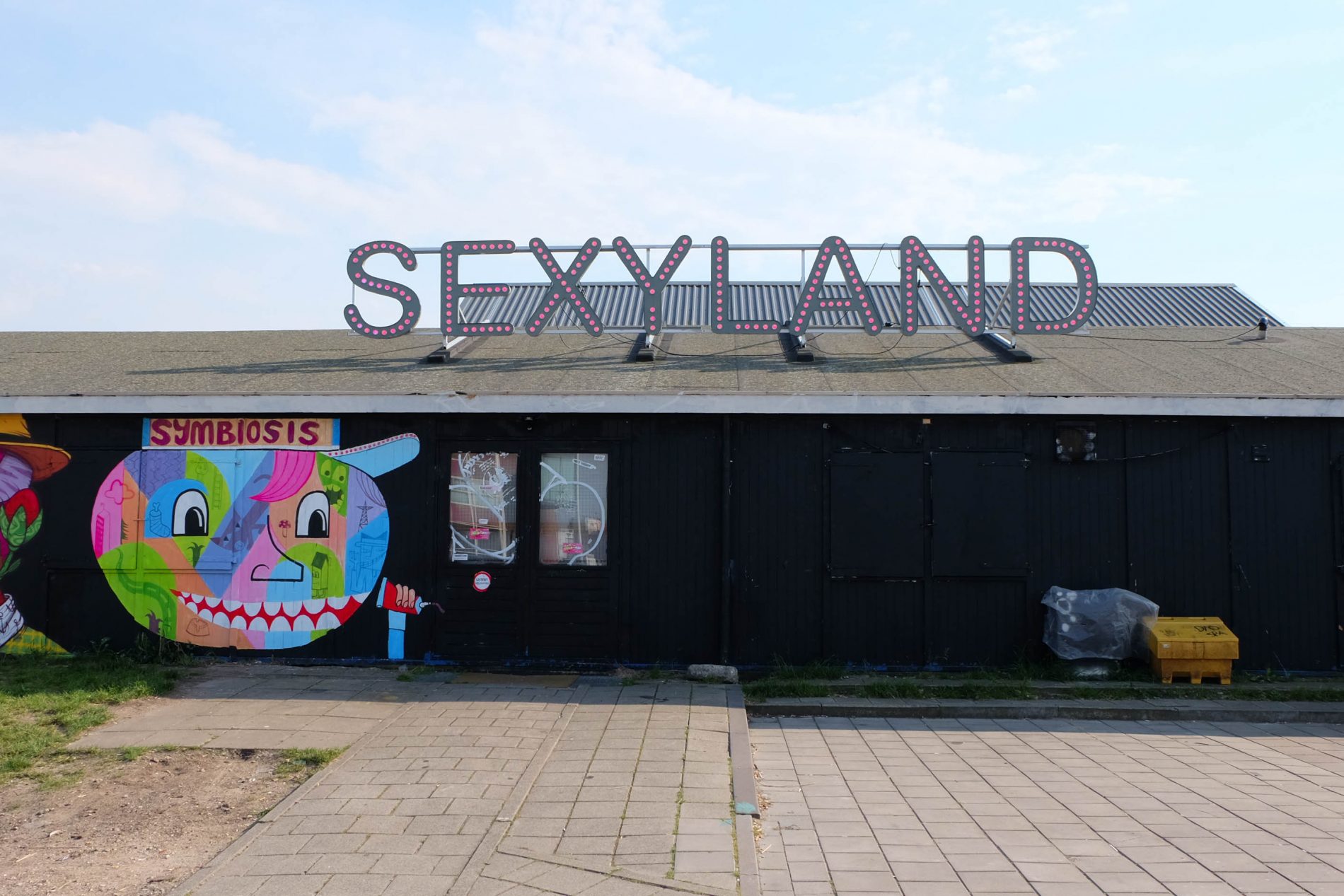 As we walk around, we watch workers constructing marquees and stages for the DGTL Amsterdam festival. Our guide explains that, because of Amsterdammer’s love of Techno, partying and lax attitude to drugs, the city hosts around 300 dance music festivals per year, which is pretty impressive for a city with a population of 800,000. The wide-open spaces of NDSM make it the perfect venue for these kinds of events and as we stand on an empty expanse of the wharf, looking back to Amsterdam over the IJ our guide explains “This view is one of my favourites that the city has to offer. It brings back memories for most Amsterdammers of a misspent youth, recovering here at sunrise after an all-night party, or having the time of their lives dancing at a festival.”